Save Money, Cut the Cost of Pool Chemicals

Automatic pool covers are a wonderful tool for swimming pools. Their sales increase every year as the word of mouth spreads that they are convenient to use and keep the pool very clean. People also are very aware of the fact they act as a certified safety cover when on the swimming pool. They are also recommended for purchase and use by many independent and government sponsored studies.

People who do not buy them sometimes focus too much on the initial cost, but if they looked into it further they would realize that automatic pool covers save time, save water, save chemicals, save energy, and save effort; what does that all come out to, they save money. They can pay for themselves in as little as two years if they are utilized on the swimming pool properly.

How Will You Save?

You don’t believe you will save chemicals? It’s true, here is how. An automatic cover actually helps you save chemicals in two ways when deployed over the pool.

It stops evaporation from taking place: a lot of chemical loss is due to the chemicals being lost as the pool water evaporates. Experts believe that by covering the pool with the automatic pool cover fabric resting on the water they can save as much as 93% of the water that would have been lost due to evaporation if the pool was uncovered. This adds up to literally thousands of gallons being saved that normally would have just evaporated away. And what was in those thousands of gallons of water? You guessed it, hundreds of dollars in valuable chemicals that you saved by not having to replace the chemicals that were lost in evaporating water.

It Blocks The Suns UV Rays

A major cause of chemical consumption is chlorine being lost due to the suns powerful UV Rays. Studies suggest that the suns powerful UV rays wreak havoc on a swimming pools chlorine demand, especially if the pool owner is using unstabilized chlorine (such as Calcium Hypochlorite) or the pools Calcium Hardness level is out of balance (most test strips do not even take a reading for calcium hardness), which it often times is. Automatic pool cover fabric is a thick woven polyester fiber that has applied PVC resin in it and often comes with added UV inhibitors also. With the pool cover deployed over the swimming pool, a large percentage of these UV Rays never make it to the pool water, so the sun cannot act on the chlorine. So if the sun cannot act on the chlorine, you won’t lose the chlorine that is normally lost in that process.

Sunlight also causes algae and organic matter to grow faster and chemicals are used up combatting this process. This growth process is called photosynthesis. Photosynthesis is described as the process used by mainly plants and some other organisms to turn light energy (normally from the Sun), into chemical energy that can be later released to fuel the plants or organisms’ activities. Simply said, it makes organic matter grow faster and the chlorine gets eaten up in the process of getting rid of it. With the pool cover deployed over the swimming pool, it once again blocks the sunlight so this photosynthesis cannot take place, and in turn, less photosynthesis saves chlorine because it does not have to work so hard. So once again your automatic pool cover has just saved you even more money on chemicals.

This is just one example of how an automatic pool cover can save something from being lost from the pool and in turn save you money. What is the most important thing it saves? It saves lives.

Kevin Losee is the product manager for Automatic Safety Covers for Coverstar, a division of Latham Pool Products. During his 12 years at Coverstar, he has worked as an automatic safety cover installer, operations manager, technical support / order entry manager, and product manager. When not focused on automatic covers, he enjoys tearing up the trail on his mountain bike. 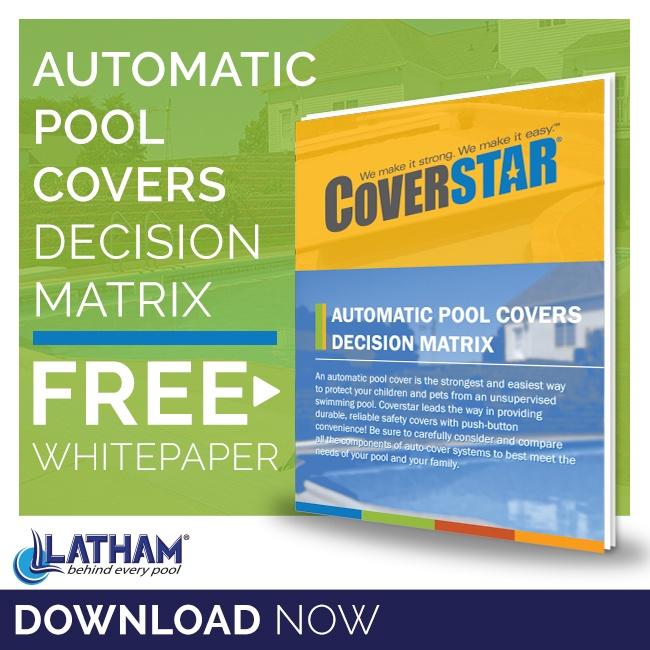